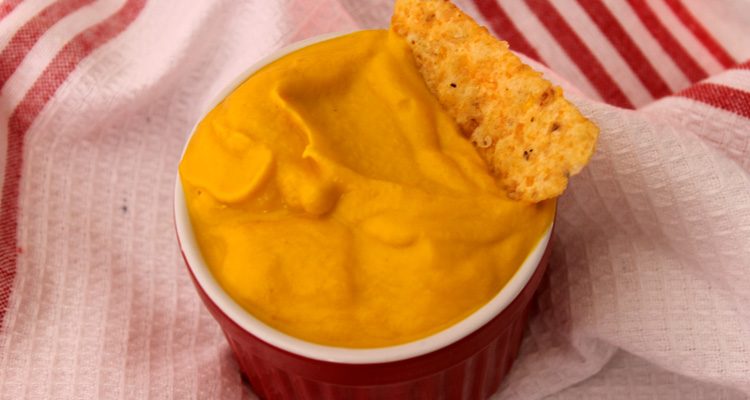 I was craving nachos. I used to eat a lot of them in University when we went out to the pubs. They tasted especially delicious when paired with a few ice-cold beers. But now that I’m old(er) and wise(r) I know what piles of chips covered in mounds of cheese, and paired with alcohol does to my body.

I also no longer have the ability to sleep until 1 pm the following day to recover from these types of benders (yes, you actually can go on a nacho cheese bender, I speak from personal experience). Luckily, I now have the pleasure of being woken to a bunch of little people running around the house at 7 am. To be accurate, one of those little people is now an inch taller than me, so I obviously need to find me some new adjectives to describe my current room-mates (aka my kids). But, I digress.

Back to finding a yummy vegan alternative for nacho cheese sauce. After browsing the internet, I found that most sauces either used a cashew base (which I normally use because cashes are great at mimicking a cheesy, creamy texture) or a potato base (which is really smart because potatoes are great for thickening sauces). I even found one that used eggplant (how cool is that)! After mulling things around in my head, I decided I really liked the idea of a veggie-based, super nutrient-dense, nut-free sauce, and since we hadn’t done our grocery shopping yet, my choices were limited to what I had in my fridge.

So I decided to create a cauliflower-based sauce, which I knew would be popular because cauliflower is a low-carb, low-calorie cancer-fighter with tons of detoxification benefits. It also has loads of beta-carotene, vitamin C, anti-bacterial and anti-microbial benefits. Now, we likely are going to be dipping tortilla chips into this sauce, so it’s not completely health-promoting, but it’s a much better alternative to the traditional version.