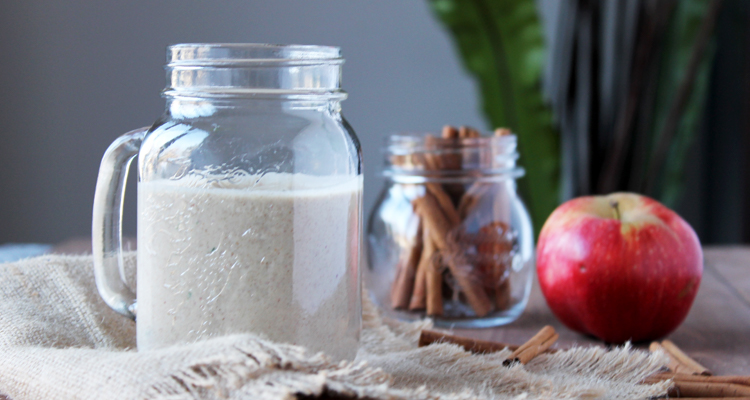 I love the combination of apples and cinnamon, usually in the fall, but for some reason I had a hankering for one now. Maybe because we had a bunch of apples sitting in a bowl on the counter and my kids refused to eat any that show any signs of bruising or imperfection. We had a whole conversation about how no one is perfect and that everyone (even fruit) should be accepted just the way they are (I know, it was a bit of a reach, but hey, you can’t blame me for trying).

Anyhow, they weren’t having it, so into my smoothie it went, where it was greatly welcomed with open heart and by my growling tummy. It turned out really delicious, almost like an apple pie in a glass, so I am now officially renaming it Apple Pie Smoothie…speaking of desserts, this gave me the idea of creating an entire e-book on dessert smoothies! Mmmm, now doesn’t that sounds amazing? Do you have any ideas for dessert smoothies I can add to my book? If so, post your ideas below and I will do my best to recreate them. In the meantime, enjoy!

If you make this smoothie, take a photo, post it on social media, and tag us using hashtag #helpyourseltoseconds, #applepiesmoothie #dessertsmoothies