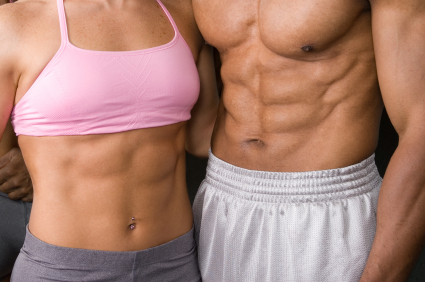 I often hear people complain that they don’t have the genetics to develop a six-pack. Sorry folks, but that’s what you tell yourself when you don’t want to do the work. Everyone has the potential to develop a six-pack but not everyone has dedication and motivation to get there. The truth is, most men will need to get down to below 11% body fat and women will need to get below 16% body fat for that six-pack to show (and that’s just the high end of the scale, most people won’t see their six packs until they’ve reached a much lower body-fat percentage). Furthermore, don’t make the mistake of thinking that just because you are at your lowest weight ever, you should have a six-pack by now. Weight and body-fat percentage are not the same. Just because you only weigh 110 lbs and have no six-pack doesn’t mean that you are genetically cursed. Your body-fat percentage was just not low enough yet.

You need to have significant lean mass combined with very low levels of fat mass for the rectus abdominis to make its elusive appearance. For most people, accessing those low body-fat levels isn’t easy. So how do you do it? Be prepared to give up the sugar, the alcohol, the processed foods and the greasy foods. Get out your measuring spoons and your food scale. Set your alarm so you can make it to the gym 5-6 days a week to lift some iron. Be ready to hit the sack early so that you can allow your body to recover from the heavy workouts and the strict diet. Keep doing this until your abs start to peek through. Enjoy them for a few days and then get ready to watch them hibernate again because maintaining those low levels of body-fat year round isn’t easy.

Now for those of us who just want to be healthy and look good in a swimsuit, the following chart developed by ACE describes the body-fat percentage categories:

To make it easier to understand visually, I have broken down the categories into ‘real life’ examples.

Now I’m not saying you should or shouldn’t aim for a six-pack. Just understand what work needs to go into achieving that six-pack before you blame it on your damn genetics.

Meeting Michelle for the First Time

Why hire an online nutrition coach?